Welcome to the Mendip@Ansford Academy page.

We now have two base provisions at Ansford Academy, one for KS3 and the other for KS4. We are a provision for supporting students through a mainstream secondary education with our focus on qualifications and independence. Some students have come from The Mendip School and others have come to use from other schools around the local area. Each student receives a personalised support package, timetable and reduced timetable. The bases are safe quiet and calm spaces to come back to after a stimulating and thought provoking mainstream lesson. We have the ability to sit down, have a cup of team and a good catch up.

We also have a pamphlet that we show potential students and families which can be viewed Here.

Jake has worked at the Mendip School for 5 years now after working in a primary school in inner London. Jake has worked across the key stages and is Computing and Online Safety lead for the school. Jake now leads TMS provisions at Ansford Academy as well as working twice a week at TMS. When not working Jake is spending time with his family, cooking, being out in the garden or riding his bike.

Jane has worked at Ansford Academy for 18 years, before this she worked at another local Somerset Secondary school for 2 years as a Teacher of Modern Foreign Languages: French and German and was also a Head of Year. For the first part of her time at Ansford Academy, she was Head of Department of Modern Foreign Languages, then moved into a pastoral role of Assistant Head of Upper school, leading Restorative Justice practices across the Academy. Her real passion for inclusion in a mainstream setting led her to be co- opted into the Special Educational Needs department in 2017 at Ansford and to subsequently train as a SENCO. Jane currently manages the TMS provision in the additional second base on site at Ansford Academy. When she is not at school, Jane loves spending time with her family and 2 cats and rabbit- trying out new recipes and catching up on the latest foreign dramas and films.

Amy worked in a Somerset primary school as an LSA for two years before moving onto the Mendip School. Amy worked with various key stages and post 16 pupils for 2 years before coming to Ansford to help support Jake when he was setting up TMS provision. When not working Amy is spending time with family, walking her dog, reading and enjoying films.

Victoria has worked at the Mendip School for 2 years.  She previously worked in PR in New York and London before training as a primary teacher and working in schools in Somerset.  Since joining the Mendip School Victoria has worked across all key stages and joined the provision at Ansford Academy a year ago.  When not at school Victoria enjoys baking, gardening, walking and recently took up paddle boarding.

Debbie has worked at the Mendip School for 5 years. She has experience in both EYFS and Key stage 3/4. She has a degree in Early years education and a Bsc (Hons) in Child and Adolescent Mental Health. Debbie’s passion is for for wellbeing and supporting young people to manage anxiety and understanding to work with their emotions. Outside of school, Debbie loves reading, writing stories and poetry and walking her dog. She also does respite care outside of school and am interested in expanding my current role by making links with Ansford.

Niamh joined The Mendip School in July after working in an Early Years nursery for a year. Niamh has a degree in Psychology from Reading University. She enjoys swimming, walks cooking and spending time with familiy friends.

Dani has always worked within the care industry, she is new to teaching but has a passion for helping people. Outside of work she has recently started her own beauty business and has recently started her own family. Dani likes to spend time with her friends and family and going on days out. She is passionate about beauty, her little boy and her main goal is to be happy.

Philippa started at the Mendip School in 2016 in Purple Class and has worked in both primary and is currently working in upper secondary. Philippa is a qualified Chef and previously worked in a bakery for 12 years. Outside of school she enjoys spending time with her family and her dog and loves watching rugby.

What a busy term we have had at The Mendip School. All of the pupils have been amazing and we have enjoyed lots of lovely...

END_OF_DOCUMENT_TOKEN_TO_BE_REPLACED

This week is Deaf Awareness Week. I had the opportunity to be a part of a BSL Signalong version of Garry Barlow's Sing with...

END_OF_DOCUMENT_TOKEN_TO_BE_REPLACED

What is the Inclusion Inquiry? As part of our work to improve SEND services within Somerset, we have launched an ‘Inclusion...

END_OF_DOCUMENT_TOKEN_TO_BE_REPLACED

Please find attached a letter regarding our plans for welcoming all children back to school on Monday the 8th of March. We...

END_OF_DOCUMENT_TOKEN_TO_BE_REPLACED

If any family needs additional support, it is available through Government schemes. Some useful links are here......

END_OF_DOCUMENT_TOKEN_TO_BE_REPLACED

Dear All, Please find attached a letter with information about a positive case of a member of staff. Any parents of pupils...

END_OF_DOCUMENT_TOKEN_TO_BE_REPLACED 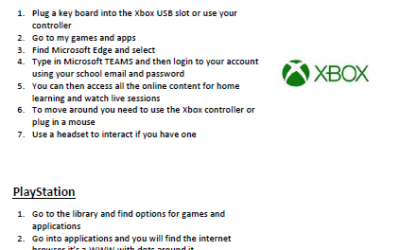 Connecting to Teams Via X-Box or PlayStation

We use Microsoft Teams to deliver our remote learning. You can access Teams Via laptop, tablet, phone and even an X-Box...

END_OF_DOCUMENT_TOKEN_TO_BE_REPLACED

If care packages and food boxes are not enough and you feel you could use some more support please contact: Coronavirus...